Ireland INC, the forum connecting Irish and US business across the globe, hosted the Ireland Day Leadership Breakfast at the New York Stock Exchange on Tuesday morning.

The Ireland INC platform aims to engage, progress and promote the very balanced economic relationship between the US and Ireland.

The event saw business leaders from both sides of the Atlantic discuss ‘The Footprint & Future of Irish Investment in the United States’.

Ireland Day also saw the launch of the a new initiative, the Ireland INC Index, in association with KPMG, an annually-updated listing which will profile the top 50 Irish companies creating employment in the United States.

Ian Hyland, President of Ireland INC, said: “The footprint of Irish Business across the US is now significant and growing in all sectors. Ireland INC are working with a range of Irish businesses connecting them in the United States. Ireland Day at the NYSE again provided Ireland INC and Irish business interests with a unique platform to engage with key US business and political decision makers and reinforce the depth of the growing economic partnership between the United States and Ireland. Ireland INC is active across the year engaging Irish business interests and we look forward to working with many Irish businesses as they seek to expand and engage across the US. In this regard, the Ireland INC Index will create a vital and trusted source of reference to track Irish investment on a continuous basis and we are delighted to be working with KPMG and our network partners Ibec, Enterprise Ireland, IDA Ireland, American Chamber of Commerce Ireland and the US Embassy’s SelectUSA programme to develop this important one-stop source of data.”

Martin Shanahan, CEO of IDA Ireland, at the Leadership Breakfast, commented on the strong link between the United States and Ireland: “In a world of relentless change, one constant is the depth and durability of Irish-US commercial linkages. Both parties are deeply embedded in each other’s economy, creating mutual benefits for all stakeholders on both sides of the Atlantic.”

The story of US investment in Ireland is one that is well told, but what is often overlooked is the two-way relationship that exists, with figures estimated for numbers employed by Irish firms in the US at 120,000. In total 227 Irish companies are based in over 2,600 locations, in all 50 states across the USA. In California alone, Irish companies account for over 25,000 jobs.

Nearly 800 Irish companies have operations in the US employing more than 100,000 people.

The US Bureau of Economic Analysis figures value Ireland’s foreign direct investment (FDI) at $85 billion (€69 billion) last year. This means Ireland is ranked the ninth-largest source of FDI in the US for 2017.

US Chargé d’Affaires Reece Smyth has described the relationship between the US and Ireland as, “A two-way relationship, once a country lane, US-Irish commercial activity is now a superhighway.”

In a report published by the American Chamber of Commerce Ireland, Joseph Quinlan, Managing Director and Chief Market Strategist at US Trust and Global Wealth and Investment Management Head of Market and Thematic Strategy at Bank of America, said, “Ireland has evolved to being more than just a transatlantic bridge. The nation has been transformed into a full-fledged global partner of Corporate America – a critical link in the global success of some of the world’s most dynamic and innovative firms.” 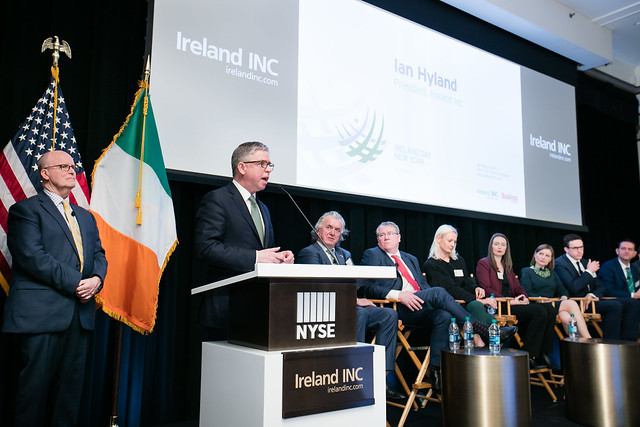 This article was originally published in Business & Finance on March 14th 2018. Roundtable with US Secretary of Commerce Wilbur Ross
Scroll to top